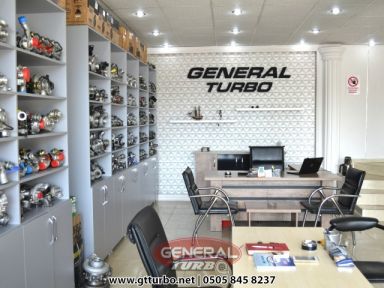 Forced induction dates from the late 19th century, when Gottlieb Daimler patented the technique of using a gear-driven pump to force air into an internal combustion engine in 1885.[6] The turbocharger was invented by Swiss engineer Alfred Büchi (1879-1959), the head of Diesel engine research at Gebrüder Sulzer (now called Sulzer), engine manufacturing company in Winterthur,[7] who received a patent in 1905 for using a compressor driven by exhaust gases to force air into an internal combustion engine to increase power output, but it took another 20 years for the idea to come to fruition.[8][9] During World War I French engineer Auguste Rateau fitted turbochargers to Renault engines powering various French fighters with some success.[10] In 1918, General Electric engineer Sanford Alexander Moss attached a turbocharger to a V12 Liberty aircraft engine. The engine was tested at Pikes Peak in Colorado at 14,000 ft (4,300 m) to demonstrate that it could eliminate the power loss usually experienced in internal combustion engines as a result of reduced air pressure and density at high altitude.[10] General Electric called the system turbosupercharging.[11] At the time, all forced induction devices were known as superchargers. However, more recently the term "supercharger" is usually applied to only mechanically driven forced induction devices.

Turbochargers were first used in production aircraft engines such as the Napier Lioness[12] in the 1920s, although they were less common than engine-driven centrifugal superchargers. Ships and locomotives equipped with turbocharged diesel engines began appearing in the 1920s. Turbochargers were also used in aviation, most widely used by the United States. During World War II, notable examples of U.S. aircraft with turbochargers include the B-17 Flying Fortress, B-24 Liberator, P-38 Lightning, and P-47 Thunderbolt. The technology was also used in experimental fittings by a number of other manufacturers, notably a variety of Focke-Wulf Fw 190 models, but the need for advanced high-temperature metals in the turbine kept them out of widespread use.[citation needed]

Another disadvantage of some superchargers is lower adiabatic efficiency as compared to turbochargers (especially Roots-type superchargers). Adiabatic efficiency is a measure of a compressor's ability to compress air without adding excess heat to that air. Even under ideal conditions, the compression process always results in elevated output temperature; however, more efficient compressors produce less excess heat. Roots superchargers impart significantly more heat to the air than turbochargers. Thus, for a given volume and pressure of air, the turbocharged air is cooler, and as a result denser, containing more oxygen molecules, and therefore more potential power than the supercharged air. In practical application the disparity between the two can be dramatic, with turbochargers often producing 15% to 30% more power based solely on the differences in adiabatic efficiency (however, due to heat transfer from the hot exhaust, considerable heating does occur).

By comparison, a turbocharger does not place a direct mechanical load on the engine, although turbochargers place exhaust back pressure on engines, increasing pumping losses.[13] This is more efficient, because while the increased back pressure taxes the piston exhaust stroke, much of the energy driving the turbine is provided by the still-expanding exhaust gas that would otherwise be wasted as heat through the tailpipe. In contrast to supercharging, the primary disadvantage of turbocharging is what is referred to as "lag" or "spool time". This is the time between the demand for an increase in power (the throttle being opened) and the turbocharger(s) providing increased intake pressure, and hence increased power.

Throttle lag occurs because turbochargers rely on the buildup of exhaust gas pressure to drive the turbine. In variable output systems such as automobile engines, exhaust gas pressure at idle, low engine speeds, or low throttle is usually insufficient to drive the turbine. Only when the engine reaches sufficient speed does the turbine section start to spool up, or spin fast enough to produce intake pressure above atmospheric pressure.

A combination of an exhaust-driven turbocharger and an engine-driven supercharger can mitigate the weaknesses of both.[16] This technique is called twincharging.

In normally aspirated piston engines, intake gases are "pushed" into the engine by atmospheric pressure filling the volumetric void caused by the downward stroke of the piston[17][18] (which creates a low-pressure area), similar to drawing liquid using a syringe. The amount of air actually inspirated, compared to the theoretical amount if the engine could maintain atmospheric pressure, is called volumetric efficiency.[19] The objective of a turbocharger is to improve an engine's volumetric efficiency by increasing density of the intake gas (usually air) allowing more power per engine cycle.

The turbocharger's compressor draws in ambient air and compresses it before it enters into the intake manifold at increased pressure.[20] This results in a greater mass of air entering the cylinders on each intake stroke. The power needed to spin thecentrifugal compressor is derived from the kinetic energy of the engine's exhaust gases.[21]

A turbocharger may also be used to increase fuel efficiency without increasing power.[22] This is achieved by recovering waste energy in the exhaust and feeding it back into the engine intake. By using this otherwise wasted energy to increase the mass of air, it becomes easier to ensure that all fuel is burned before being vented at the start of the exhaust stage. The increased temperature from the higher pressure gives a higher Carnot efficiency.

The control of turbochargers has changed dramatically over the 100-plus years of its use. Modern turbochargers can usewastegates, blow-off valves and variable geometry, as discussed in later sections.

The reduced density of intake air is often compounded by the loss of atmospheric density seen with elevated altitudes. Thus, a natural use of the turbocharger is with aircraft engines. As an aircraft climbs to higher altitudes, the pressure of the surrounding air quickly falls off. At 5,486 metres (17,999 ft), the air is at half the pressure of sea level, which means that the engine produces less than half-power at this altitude.[23]

This section does not cite any sources. Please help improve this section by adding citations to reliable sources. Unsourced material may be challenged and removed. (May 2010)

In automotive applications, boost refers to the amount by which intake manifold pressure exceeds atmospheric pressure. This is representative of the extra air pressure that is achieved over what would be achieved without the forced induction. The level of boost may be shown on a pressure gauge, usually in bar, psi or possibly kPa.[23]

In aircraft engines, turbocharging is commonly used to maintain manifold pressure as altitude increases (i.e. to compensate for lower-density air at higher altitudes). Since atmospheric pressure reduces as the aircraft climbs, power drops as a function of altitude in normally aspirated engines. Systems that use a turbocharger to maintain an engine's sea-level power output are called turbo-normalized systems. Generally, a turbo-normalized system attempts to maintain a manifold pressure of 29.5 inches of mercury (100 kPa).[23]

In petrol engine turbocharger applications, boost pressure is limited to keep the entire engine system, including the turbocharger, inside its thermal and mechanical designoperating range. Over-boosting an engine frequently causes damage to the engine in a variety of ways including pre-ignition, overheating, and over-stressing the engine's internal hardware.

For example, to avoid engine knocking (a.k.a. detonation) and the related physical damage to the engine, the intake manifold pressure must not get too high, thus the pressure at the intake manifold of the engine must be controlled by some means. Opening the wastegate allows the excess energy destined for the turbine to bypass it and pass directly to the exhaust pipe, thus reducing boost pressure. The wastegate can be either controlled manually (frequently seen in aircraft) or by an actuator (in automotive applications, it is often controlled by the engine control unit).

Turbocharger lag (turbo lag) is the time required to change power output in response to a throttle change, noticed as a hesitation or slowed throttle response when accelerating as compared to a naturally aspirated engine. This is due to the time needed for the exhaust system and turbocharger to generate the required boost. Inertia, friction, and compressor load are the primary contributors to turbocharger lag. Superchargers do not suffer this problem, because the turbine is eliminated due to the compressor being directly powered by the engine.

Turbocharger applications can be categorized into those that require changes in output power (such as automotive) and those that do not (such as marine, aircraft, commercial automotive, industrial, engine-generators, and locomotives). While important to varying degrees, turbocharger lag is most problematic in applications that require rapid changes in power output. Engine designs reduce lag in a number of ways:

The boost threshold of a turbocharger system is the lower bound of the region within which the compressor operates. Below a certain rate of flow, a compressor produces insignificant boost. This limits boost at a particular RPM, regardless of exhaust gas pressure. Newer turbocharger and engine developments have steadily reduced boost thresholds.

Electrical boosting ("E-boosting") is a new technology under development. It uses an electric motor to bring the turbocharger up to operating speed quicker than possible using available exhaust gases.[24] An alternative to e-boosting is to completely separate the turbine and compressor into a turbine-generator and electric-compressor as in the hybrid turbocharger. This makes compressor speed independent of turbine speed. In 1981, a similar system that used a hydraulic drive system and overspeed clutch arrangement accelerated the turbocharger of the MV Canadian Pioneer (Doxford 76J4CR engine).[citation needed]

Turbochargers start producing boost only when a certain amount of kinetic energy is present in the exhaust gasses. Without adequate exhaust gas flow to spin the turbine blades, the turbocharger cannot produce the necessary force needed to compress the air going into the engine. The boost threshold is determined by the engine displacement, engine rpm, throttle opening, and the size of the turbocharger. The operating speed (rpm) at which there is enough exhaust gas momentum to compress the air going into the engine is called the "boost threshold rpm". Reducing the "boost threshold rpm" can improve throttle response.

The turbocharger has three main components:

Many turbocharger installations use additional technologies, such as wastegates, intercooling and blow-off valves.

Energy provided for the turbine work is converted from the enthalpy and kinetic energy of the gas. The turbine housings direct the gas flow through the turbine as it spins at up to 250,000 rpm.[25][26] The size and shape can dictate some performance characteristics of the overall turbocharger. Often the same basic turbocharger assembly is available from the manufacturer with multiple housing choices for the turbine, and sometimes the compressor cover as well. This lets the balance between performance, response, and efficiency be tailored to the application.

The turbine and impeller wheel sizes also dictate the amount of air or exhaust that can flow through the system, and the relative efficiency at which they operate. In general, the larger the turbine wheel and compressor wheel the larger the flow capacity. Measurements and shapes can vary, as well as curvature and number of blades on the wheels.